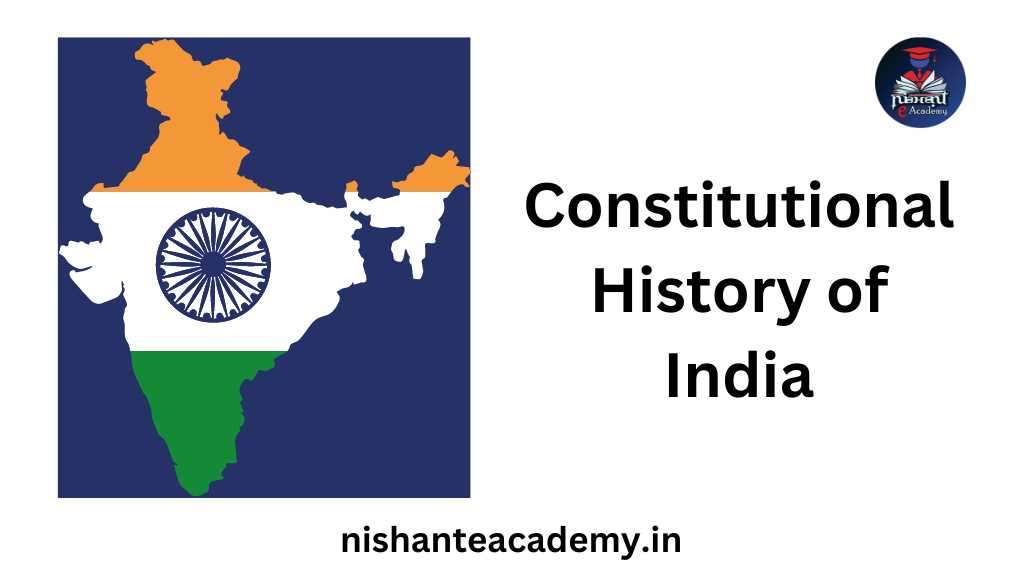 In this post, we will discuss the Constitutional History (Constitutional Development) of India and cover Regulating act 1773, Pitts India Act 784, the Charter acts, Indian Council acts, the Government of India Acts, the Cripps Mission, the Wavell Plan, the Simla Conference, Cabinet Mission, the Mountbatten Plan and Indian Independence Act 1947.

The East India Company (EIC) was formed by some merchants of London on 31 December 1600. The company had secured The Royal Charter from Queen Elizabeth. Through this charter, the company got absolute rights for trade with India and some portions of South-East Asia.

This was the first written charter for the Company rule in India. British Parliament’s control over the company started with this charter. Territories controlled by the company no longer remained a private affair of the traders.

Under this Act, the Court of Directors was left with responsibilities in matters of trade and commerce only. For political matters, a board of control of 6 members was appointed. The board had the powers to superintend, direct and control all operations of the civil and military government of British possessions in India.

The Act deprived the company of the monopoly of trade in India. While the powers of the three councils of Madras, Bombay and Calcutta were enlarged, they were subjected to greater control of the British Parliament.

With Charter Act, 1833, British rule started the first step of Constitution-making in India. This Act is credited with introducing Institutional specialisation in British territories in India.

This was the last charter Act. Though the Governor-General’s Council continued to remain the sole authority to enact laws for the whole of British India, yet the system was entirely changed, thanks to so many alterations introduced by this Act.

The Mutiny of 1857 gave a death blow to the system of East India Company’s rule in India. After the suppression of the Mutiny, British Parliament passed a new act, the Act of 1858, which brought all the Company-controlled territories under the direct rule of Great Britain. The act is known as The Act for the Good Government of India” of 1858.

Under this Act all the Indian territories then in possession of the company became vested in the crown and were to be governed directly by and in the name of the Crown, acting through a Principal Secretary of State.

The Act was aimed at establishing closer contacts with public opinion in the country. The Act not only decentralised the legislative powers of the Governor-GeneraI’s Council, but it also paved way for Indian to be nominated on the Council.

The Indian Council Act of 1892

The 1861 Act was widely criticised for giving too much power to the Governor-General and ignoring the aspirations of Indians. There were strong feelings against the British. The Indian National Congress, which came into being in 1985, was demanding roles for Indians in legislative business. Against this backdrop, the Indian Council Act of 1892 was passed. This Act was important for two reasons. a) it introduced representative element, b) restrictions on the council were eased:

The Indian Council Act of 1909

The Government of India Act 1919 was based on the Montagu-Chelmsford Report. In 1917, Mr. Montagu, the then Secretary of State for India, made a historic statement in the British House of Commons, promising to establish responsible government in India. One year later, in 1918, the Montagu-Chelmsford report was published. The report ignored the demand of self-governing dominions. However, the demand for separate communal electorates was accepted by the report.

1919 Act failed to deliver the promise of bringing responsible government. There were strong demands for more administrative reforms. The Act had made a promise to set up a commission to inquire into the working of the Act. The commission was scheduled to be appointed in 1929. However, it was appointed in 1927, two years before the schedule.

The Government of India Act 1935

The Government decided to hold a Round Table Conference (RTC) in London in 1930 to consider constitutional reforms. After three RTCs, the British government published a White Paper in 1933 containing an outline of a new constitution.

The scheme contained provisions for a federal setup and provincial autonomy. The British Parliament constituted a joint committee to further consider the government’s scheme formulated in the white paper. On the basis of its report, the Government of India Act 1935 was passed.

In March 1942, when World War II was passing through a crucial stage, the British government sent Cabinet Minister Sir Stafford Cripps on a special mission to India. However, the Cripps Mission ended in a failure, as its proposals were rejected by all the political parties on different grounds.

Lord Louis Mountbatten reached India on 22 March 1947. Upon realising that the Congress and the Muslim League won’t be able to work together either in the Interim Government or in the Constituent Assembly, he prepared a plan for the partition. The plan, popularly known as the Mountbatten Plan, was prepared in consultation with the leaders in Britain.

Making of the Constitution

Framing of the Constitution

Who exercised the most profound influence in framing the Indian Constitution?

The Government of India Act 1935 exercised the most profound influence in framing the Indian Constitution.