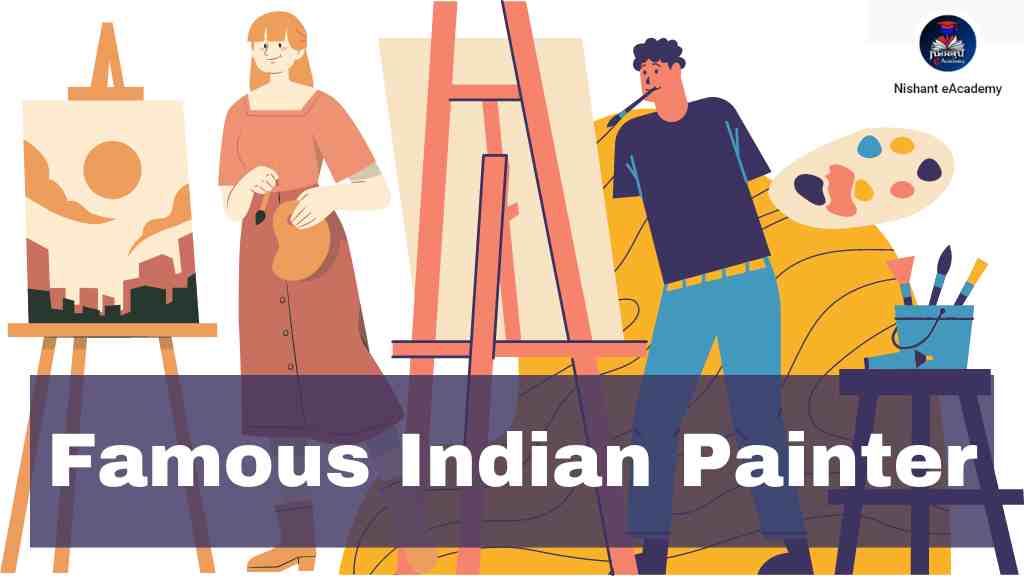 Paintings are the mirror of thoughts. In this post, we are providing a complete list of famous Indian painters, their painting styles, and their eminent paintings. Indian classical painters are the gems of India who have always represented India’s true status all over the world through their colours.

Abanindranath Tagore was the principal artist and creator of ‘Indian Society of Oriental Art’ and the first major exponent of swadeshi values in Indian art, thereby founding the influential Bengal school of art, which led to the development of modern Indian painting. The National Gallery of Modern An (NGMA), New Delhi organised a virtual tour titled “The Great Maestro-Abanindranath Tagore” to commemorate the 150th birth anniversary of Abanindranath Tagore on 7th August 2020.

Sher-Gil first received recognition at the age of 19 through her painting Young Girls. It won her many accolades including a gold medal and election as an Associate of the Grand Salon in Paris. She was the youngest ever member and the only Asian to have received this recognition. Amrita’s work can be defined as a bridge between western and Indian art style.

Over the course of his six-decade career, Souza experimented with a number of genres and styles, but it’s probably his strong figurative practice, his line drawings and series of ‘black paintings’ produced in London during the 1950s and ’60s for which he is most famous. He’s also revered for his repetitive use of themes and motifs, including Catholicism, the female nude, and the dichotomy between good and evil.

Vasudev S. Gaitonde is one of India’s most prominent abstract artists. Gaitonde graduated from the J.J. School of Art, Bombay (Mumbai), in 1948. Shortly thereafter he became associated with the Progressive Artists’ Group founded in 1947 by artists K.H. Ara, S.K. Bakre, H.A. Gade, M.E Hussain, S.H. Raza, and F.N. Souza. The group, based in Mumbai, aimed at breaking away from all clichéd representations in Indian art.

Greatly influenced by Zen Buddhism, Gaitonde shunned the limelight, and his earlier figurative work was soon replaced by meditative nonrepresentational paintings. He rejected application of the word abstract to his work and instead referred to it as “nonobjective” —an entirely personal encounter on canvas. Gaitonde’s paintings, often compared with those of many well-known Western artists, are widely exhibited.

Pyne is one of the most notable contemporary artists of the Bengal School of Art, who had also developed his own style of “poetic surrealism”, fantasy and dark imagery, around the themes of Bengali folklore and mythology. Pyne started as a watercolourist in the Bengal school mode, and gradually shifted to gouache and finally to tempera, for his subsequent abstract and surrealist work period, in ochre, black and blue shades.

Sawlaram Lakshman Haldankar was a well-known Indian painter. Haldankar was born into a family from Sawantwadi, which was then a Princely State and is located today in Maharashtra state. He showed early talent in the arts and this was noticed by the headmaster of his school in Sawantwadi. He received a scholarship to study at the Sir J.J. School of Art, Bombay.

His most famous painting is Glow of Hope, also known as Woman With the Lamp. The young girl in that painting is none other than his own daughter Gita Haldankar. Haldankar made another painting with his second daughter Lilavati known as the Divine Flame also under the same concept of Glow of Hope.

Husain is most known for his bold and vibrantly coloured narrative paintings in a modified Cubist style. His art captures a wide variety of subjects including Mahatma Gandhi; Mother Teresa; the Ramayana; the Mahabharata; the British raj; and motifs of Indian urban and rural life.

Jamini Roy began his career as a painter of Post-Impressionist landscapes and portraits. The European influences in his art were much in keeping with his training in a British academic system. However, in mid-1920s, Roy completely changed his style from his academic Western training to a new style which was based on Bengali folk traditions.

Nandalal Bose was one of the pioneers of modern Indian art and a key figure of Contextual Modernism. As the movement for independence raged on in India, Nandalal Bose, along with other prominent artists, worked towards moving the Indian art scene away from western influences that had been prevalent in art schools of the time.

Though best known as a poet and as winner of the Nobel Prize for Literature, Rabindranath Tagore was also an artist. He began painting late in his career when he was in his sixties.

His works are regarded as among the best examples of the fusion of European techniques with a purely Indian sensibility. Varma also made affordable lithographs of his paintings, making them available to the public. This in turn enhanced his reach and reputation as a painter.

Gujral is known for his diversity as an artist; and he has created works in painting, graphics, mural, sculpture, architecture and interior design. He is also a writer. One of the prominent themes he has explored in his art is the agony faced by the people during the partition of India.

S. H. Raza began as a painter of expressionistic landscapes. He moved to France in October 1950 where he continued his experiments with Western Modernism. In the 2000s, Raza delved deeper into Indian spirituality creating works around the Kundalini, Nagas, and the Mahabharat.

A painter, sculptor and film-maker, Tyeb Mehta was part of the Progressive Artists’ Group (PAG) in Mumbai. Here, he interacted with many artists who would later be renowned like S. H. Raza and M. F. Husain.

Zamindari Ryotwari and Mahalwari Land Revenue Syst...
In this post, ...
Bullet Notes on Mauryan Dynasty
Best and Easy ...
The Doctrine of Lapse (1848-56)
The Doctrine of...