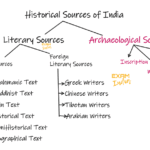 In this post, we are covering Indian History one of the most important topics “Historical Sources”. It is also known as “Primary Sources of History”. This is the second Chapter of the Indian History and Indian Freedom Struggle notes. In the first chapter, we have covered the Introduction part. This subject is a part of General Studies or General Awareness included in most of the exams covered in India. with this entire series, we are trying to cover the complete General Studies – essential topics that ask in UPSC exams, SSC exams, BIS exams, UGC NET, BPSC, UPPCS, State PCS, CDS, Railways – RRB exams, DMRC, DFCCIL, State exams and many more.

What are Historical Sources?

The main sources of History can be classified into Literary Sources and Archaeological Sources.

The writings of foreign travellers and chroniclers provide valuable sources of ancient Indian history. Of these, some visited India and some others never visited India (like Herodotus, Ktesias, Pliny, Justin etc) based their accounts on information received from different sources. These accounts help in the writing of Indian history especially to resolve the problem of chronology. These have been found immensely useful in building up the framework of Indian chronology. Foreign sources can be divided into four categories – Greek-Roman, Chinese, Tibetan and Arabian. Important foreign writers’ work is mentioned in the below table:

what are the prime sources of History?

Which type of historical sources are the most reliable source of History?

Archaeological Sources include buildings, houses, Coins, Bones, Monuments, inscriptions etc. They are more reliable than Literary Sources as it is impossible to change.