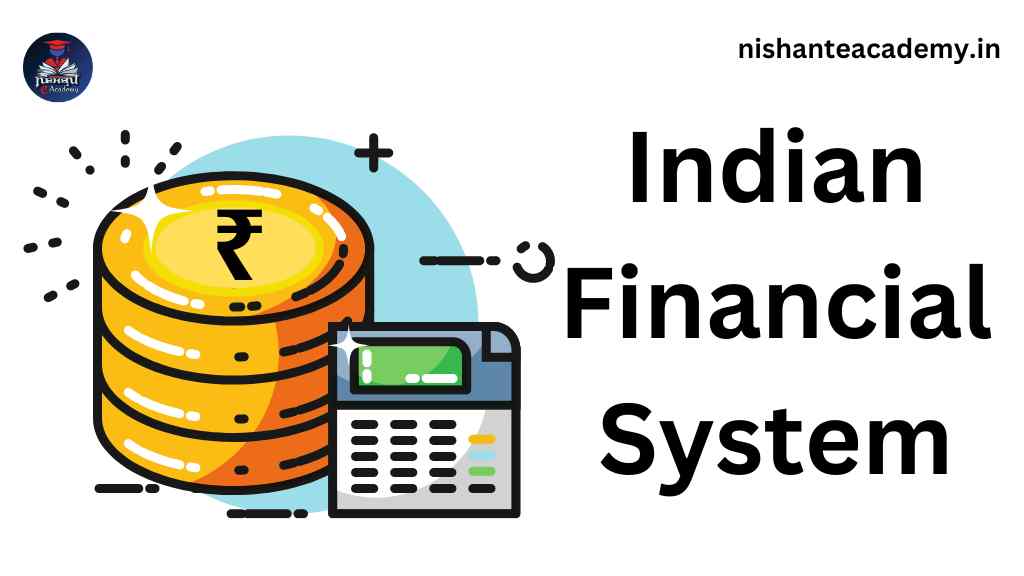 Indian Financial System is a system in which People, Financial Institutions, Banks, Industrial Companies and the Government demand for fund and the same is supplied to them. There are two parts of Indian Financial System—first demand side and second supply side. The representative of demand side can be Individual investor, Industrial and Business Companies, Government etc. and the representative of supply side will be Banks, Insurance Companies, Mutual Fund and other Financial Institutions.

The Indian financial system, which refers to the borrowing and lending of funds or to the demand for and supply of funds, consists of two parts, viz., the Indian money market and the Indian capital market.

The organised banking system in India can be broadly divided into three categories, viz., the central bank of the country known as the Reserve Bank of India, the commercial banks and the co-operative banks which includes private sector and public sector banks and also foreign banks.

The Reserve Bank of India

The RBI was established under the Reserve Bank of India Act, 1934 on 1st April, 1935 with a capital of Rs. 5 crore. It was nationalised on 1st January, 1949; on the recommendation of Parliamentary Committee 1948. It is the Central Bank of India. Its financial year is 1st July to 30th June.

RBI is governed by a central board (headed by a governor) appointed by the central government of India. The general superintendence and direction of the bank is entrusted to central board of directors of 20 members, the Governor and four deputy Governors, one Governmental official from the ministry of Finance, ten nominated directors by the government to give representation to important elements in the economic life of the country, and the four nominated director by the Central Government to represent the four local boards with the headquarters at Mumbai, Kolkata, Chennai and New Delhi. Local Board consists of five members each central government appointed for a term of four years. RBI has 22 regional offices across India.

The RBI Act 1934 was commenced on April 1, 1935. The Act, 1934 provides the statutory basis of the functioning of the bank. The bank was constituted for the need of following:

Functions of RBI as a central bank of India are explained briefly as follows:

Bank of Issue – The RBI formulates, implements, and monitors the monitory policy. Its main objective is maintaining price stability and ensuring adequate flow of credit to productive sector.

Regulator-Supervisor of the financial system – RBI prescribes broad parameters of banking operations within which the country’s banking and financial system functions. Their main objective is to maintain public confidence in the system, protect depositor’s interest and provide cost effective banking services to the public.

Issuer of currency – A person who works as an issuer, issues and exchanges or destroys the currency and coins that are not fit for circulation. His main objective is to give the public adequate quantity of supplies of currency notes and coins and in good quality. The Finance Ministry issues Currency Notes and Coins of rupee one, all other Currency Notes are issued by the Reserve Bank of India.

Developmental role – The RBI performs the wide range of promotional functions to support national objectives such as contests, coupons maintaining good public relations and many more.

Banker to government performs merchant banking function for the central and the state governments; also acts as their banker.

Banker to banks maintains banking accounts to all scheduled banks.

Supervisory Functions – In addition to its traditional central banking functions, the Reserve Bank performs certain non-monetary functions of the nature of supervision of banks and promotion of sound banking in India. The Reserve Bank Act 1934 and the banking regulation act 1949 have given the RBI wide powers of supervision and control over commercial and co-operative banks, relating to licensing and establishments, branch expansion, liquidity of their assets, management and methods of working, amalgamation, reconstruction and liquidation.

Promotional Functions – With economic growth assuming a new urgency since independence, the range of the Reserve Bank’s functions has steadily widened. The bank now performs a variety of developmental and promotional functions, which, at one time, were regarded as outside the normal scope of central banking. The Reserve bank was asked to promote banking habit, extend banking facilities to rural and semi-urban areas, and establish and promote new specialized financing agencies.

Cash Reserve Ratio – CRR is the amount of funds that the banks have to keep with the RBI. If the central bank decides to increase the CRR, the available amount with the banks comes down. The RBI uses the CRR to drain out excessive money from the system. Commercial banks are required to maintain with the RBI an average cash balance, the amount of which shall not be less than 3% of the total of the Net Demand and Time Liabilities (NDTL), on a fortnightly basis and the RBI is empowered to increase the rate of CRR to such higher rate not exceeding 20% of the NDTL.

Repo Rate – The rate at which the RBI lends money to commercial banks is called repo rate. It is an instrument of monetary policy. Whenever banks have any shortage of funds they can borrow from the RBI.

A reduction in the repo rate helps banks get money at a cheaper rate and vice versa. The repo rate in India is similar to the discount rate in the US.

Reverse Repo Rate – It is the rate at which the RBI borrows money from commercial banks. Banks are always happy to lend money to the RBI since their money are in safe hands with a good interest.

An increase in reverse repo rate can prompt banks to park more funds with the RBI to earn higher returns on idle cash. It is also a tool which can be used by the RBI to drain excess money out of the banking system.

Statutory Liquidity Ratio (SLR) – Every bank is required to maintain at the close of business every day, a minimum proportion of their Net Demand and Time Liabilities as liquid assets in the form of cash, gold and unencumbered approved securities. The ratio of liquid assets to demand and time liabilities is known as Statutory Liquidity Ratio (SLR). RBI is empowered to increase this ratio up to 40%. An increase in SLR also restricts the bank’s leverage position to pump more money into the economy.

Marginal Standing Facility Rate – RBI announced that MSF scheme has become effective from 09th May, 2011. Under this scheme, Banks will be able to borrow up to 1% of their respective Net Demand and Time Liabilities. The rate of interest on the amount accessed from this facility will be 100(i.e. 1%) basis point above the repo rate. This scheme is likely to reduce volatility in the overnight rates and improve monetary transmission Overnight.

Individuals who invest directly on their own in securities are also supplier of fund to capital market. The trend in the capital market is basically affected by two important factors (i) operations of the institutional investors in the market and (ii) the excellent results flowing in from the corporate sector.

Capital market is divided in to two part (i) Primary Capital Market (ii) Secondary Market. If shares or debentures of private corporations, primary sureties of government companies or new sureties and issue of bonds of public sector are sold or purchased in the capital market, then the market is called Primary Capital Market. Secondary Market includes transactions in the stock-exchange and guilt aged market.

The stock exchange is the market for buying and selling of stocks, shares, securities, bonds & debentures etc. It increases the market ability of existing securities by providing simple method for public & others to buy and sell securities.

BSE SENSEX — This is the most sensitive share index of the Mumbai Stock Exchange. This is the representative index of 30 main shares. Its base year is 1978-79. BSE is the oldest stock exchange of India, founded in 1875.

A company may have many different types of shares that come with different conditions and rights.

Equity shares – These shares are also known as ordinary shares. They have the potential to give the highest financial gains, but also have the highest risk. Ordinary shareholders are the last to be paid if the company is wound up. They are the shares which do not enjoy any preference regarding payment of dividend and repayment of capital. They are given dividend at a fluctuating rate. The dividend on equity shares depends on the profits made by a company. Higher the profits, higher will be the dividend, where as lower the profits, lower will be the dividend.

Preference shares – These shares are those shares which are given preference as regards to payment of dividend and repayment of capital.Shares in this category receive a fixed dividend, which means that a shareholder would not benefit from an increase in the business’ profits.They do not enjoy normal voting rights. Preference shareholders have some preference over the equity shareholders, as in the case of winding up of the company, they are paid their capital first. They can vote only on the matters affecting their own interest. These shares are best suited to investors who want to have security of fixed rate of dividend and refund of capital in case of winding up of the company.

Deferred shares – These shares are those shares which are held by the founders or pioneer or beginners of the company. They are also called as Founder shares or Management shares.In deferred shares, the right to share profits of the company is deferred, i.e. postponed till all the other shareholders receive their normal dividends. Being the last claimants of the profits, they have a considerable element of speculation or uncertainty and they have to bear the greatest risk of loss. The market price of such shares shows a very wide fluctuation on account of wide dividend fluctuations. Deferred shares have disproportionate voting rights. These shares have a small denomination or face value.

The expressions ‘Bulls’ and ‘Bears’ are related with

The expressions ‘Bulls’ and ‘Bears’ are related to Stock Exchange.

In which year SEBI was established?

SEBI was established in the year 1988.

The Word ‘Actuaries’ is related to ___

The Word ‘Actuaries’ is related to Insurance.

When the Reserve Bank of India was established?

The Reserve Bank of India was established in 1935.