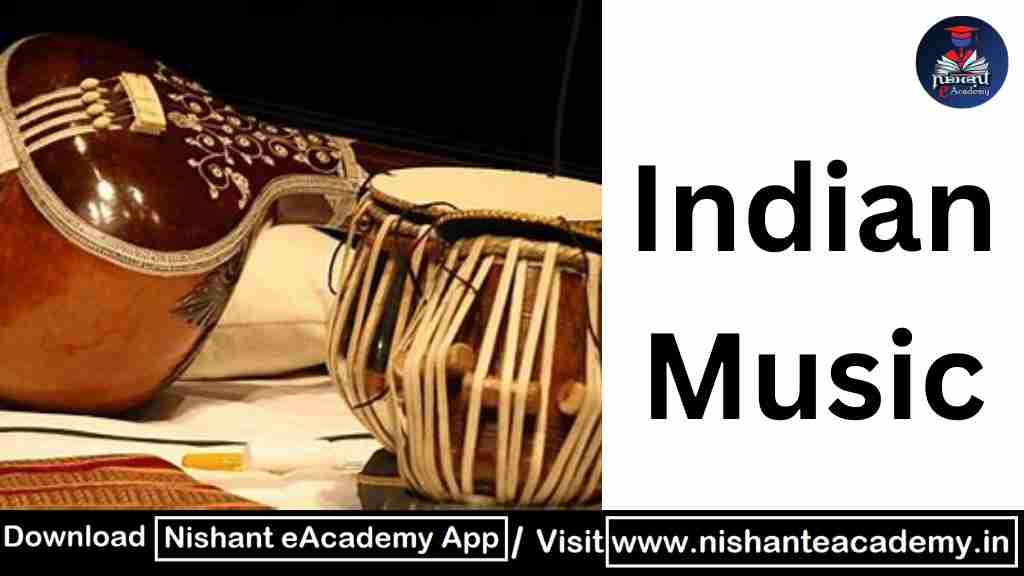 In this post, we are providing a complete and best note on traditional Indian music and a list of popular Indian musicians and musical instruments.

In most of the Competitive examinations where General Studies is a game-changer, examiners always make questions “Art and Culture” is one of the most important topics asked in the General Studies and General Knowledge” Sections of many competitive exams like UPSC CSE, State PCS, CDS, NDA, FSSAI, SSC, and Others. we are providing students with important topics that are the favourite of most of the examiners while framing questions. we are providing students with comprehensive Art and Culture notes on the World-renowned relaxing Music of India. Sources of our notes are different government portals like “cultural India“, “Incredible India“, and “Ministry of Culture” for the latest updates and many competitive books like NIOS, IGNOU, NCERT, the National Museum site for pictures and Wikipedia for static parts.

Carnatic music, one of the two major streams of Indian music, is indigenous to southern India. It flourished under the patronage of Krishnadevaraya in Vijayanagar, the capital city of the Vijayanagara Empire. Purandara Dasa, also known as pithamaha (father) of Carnatic music, had made great contributions to this genre. He is one of the persons who devised a basic scale for teaching Carnatic music.

Even though instruments are used, Carnatic music is basically a vocal art. The golden period of south Indian classical music was during the time of Tyagaraja, Muthuswami Dikshitar, and Syama Sastri. These contemporaries are called the ‘musical trinity’.

Hindustani is a continuously evolving classical music genre, in northern India. Until the 13th century, the music of the whole nation remained the same. It was after the Mughal invasion that the north Indian expression became copiously influenced by Persian and Arabic music.

Hindustani music has several sub-styles and improvisations. This genre incorporates many instruments, musical forms, and ragas from other musical traditions.

Pandit VN Bhatkhande is known for his major contribution of compiling Hindustani musical compositions and publishing the reference series -Hindustani Sangeet Kramik Pusthak Malika. Amir Khusrau, a prolific musician, is believed to have developed the khayal, Tarana and qawwali styles of music. He is often called the ‘father of qawwali’ (Indian Sufi form). Other artists like Ravi Shankar and Ali Akbar Khan popularised Hindustani music around the world.

Regional music in India is as diverse as the nation’s cultural traditions.
Folk music is an inevitable part of Indian culture. Different types of musical instruments are used by people of different geographical and cultural groups.

It is a kind of popular folk music from the Braj region of Uttar Pradesh. Rasiya means ‘filled with rasa or emotions’ and Geet means ‘song’. These songs are sung in the regional Hindi dialect called Braj Basha. Braj is where Lord Krishna spent most of his childhood and youth. The usual theme of Rasiya music is the love and life of Krishna.

Pankhida music originated in the villages of Rajasthan. These songs are sung by peasants to ease their gruelling work in the fields. The literal meaning of the word ‘Pankhida’ is lover.

It is another style of folk music from Rajasthan. Lotia songs are sung by rural women during the festival of Lotia. They bring decorated vessels named Iotas and Kalash filled with water from ponds, which they carry back after the worship.

Pandwani is a popular musical form of Chhattisgarh. The word Pandwani means ‘songs about pandavas’. These folk ballads recite stories from Mahabharata, mainly the legends of the Pandava brothers. A singer-narrator leads the performance. Pandwani artists don’t stick to any rigid style; they always bring in something new. Impromptu lyrics and gestures are very common in this genre.

Shakunakhar: Shakunakhar is ‘Uttarakhandi mangal geet’ sung on many occasions like baby shower, birth of a baby, Ganesh Puja, etc, in the foothills of Himalayas. Shakunakhar songs are sung by women, not accompanied by any instruments. These charming songs are basically prayers for good fortune.

This Goan genre of music is a blend of western and Indian styles. Its origin traces back to the 19th century. Mando is popular among the Catholics of Goa. The major theme is love; there are also historical narratives and grievance against injustice.

Alha-Udal ballads of Bundelkhand narrates the legends of the valiant warrior-brothers Alha and Udal. They served the Chandel King Paramardideva, popularly known as Paramal. Alha songs mostly highlight the principles of morality, nobility, and chivalry.

They are cheerful songs associated with the ‘festival of colours-HoIi’. Popular in Uttar Pradesh and Bihar, these semi-classical songs are mostly about the love life of Krishna and Radha.

Singing Teej songs to rejoice the arrival of monsoon is a tradition followed by Rajasthani women. Monsoon festivals in the state are closely associated with Lord Shiva and Goddess Parvathi. So, the themes of Teej songs revolve around the union of the divine couple. They are customarily sung on the third day after Amavasya (new moon).

Sohar songs are traditionally sung in order to rejoice the birth of a child. Though these songs are more popular in Uttar Pradesh, they are sung in other regions too.

These enthralling, soulful poems aiming spiritual nourishment are of Persian origin. They have been a part of Hindustani music since the 13th century. Qawwali ensemble usually includes single or multiple vocalists, a few instrumentalists and a small group for rhythmic handclapping. Amir Khusrow, a prolific Sufi singer and poet, is considered as the ‘father of Qawwali’.

It is the most popular traditional music form of Jammu and Kashmir. Chhakri songs are sung by the natives during religious festivals and other celebrations. They are usually accompanied by ‘rouf’, a dance form, in the end. Some of the instruments used in Chhakri performances are harmonium, sarangi, rubab, etc. Famous love stories like Laila and Majnu are common themes in Chhakri songs.

Laman is an interesting style of Himachali folk music originated in the Kullu Valley region. These melodious songs are sung by native women on wedding eves or other such special occasions. Tonal simplicity and rhythmic patterns followed in Laman songs make them delightful.

Kajri songs are semi-classical songs popular in Uttar Pradesh and Bihar. They are usually sung by women during monsoon. It is a traditional practice to perform Kajri on the third day of the second half of ‘bhadra’ (a month in Hindu calendar). On such occasions, women dance gracefully to these songs.

They are impassioned love songs that originated in Punjab. This genre is largely influenced by the folk music of camel riders in Sindh-Punjab region. Vibrant and fast-paced rhythmic pattern makes Tappa stand out in Hindustani genre. They are semi-classical songs, which were initially sung only in royal courts.

They are Marathi ballads praising a hero or a place. The term Powada means ‘glorious narration of a story’. The chief narrator, who plays the duff (a drum), is called shahir. ‘Afzal Khanacha Vadh’, about the encounter between Afzal Khan and Shivaji, is believed to be the earliest Powada.

Bhakha is a melodious harvest song prevalent in Jammu. They are usually sung with the accompaniment of a harmonium.

It is a genre of folk songs popular in Odisha. The name Daskathia is derived from two words- ‘Das’, the devotee on behalf of whom the worship is done and ‘Kathi’, the clappers used while singing Daskathia songs. This religious art form is usually performed by two people.

It is a power-packed musical narrative indigenous to Andhra Pradesh. The literal meaning of the word burra is ‘tambura’ (a musical instrument similar to veena). The lead performer uses tambura throughout the recital of the story. The panoramic range of themes stretches from mythological tales to social issues. It is said that Burrakatha had a major role in acting as bulwark against colonialism. These performances also include a lot of gestures and dance moves to emphasise the content.

They are songs sung as part of Bihu festivals like Assamese New Year, arrival of spring, etc. These songs are an indispensable part of many tribal groups in Asom. These love songs actualIy denote the fertility of mother nature to provide a good harvest.

Lai Haraoba is a Manipuri festival celebrated to revere the forest deities. This festival is traditionally celebrated among the Meitei ethnic group of Manipur. The main highlights of this festival are the tuneful songs and the dainty-graceful dance performances. Ougri Hangen (song of creation) and Heijing Hirao (a ritualistic song) are the two popular Lai Haraoba songs sung on the last day of the festival.

This ancient musical-story telling form is from Tamil Nadu. It is called Villu Paatu because the lead vocalist/narrator holds a villu (bow) shaped instrument while performing the song. Both historical and social themes are chosen for Villu Paatu.

The basant (spring) festival songs of Garhwal are called Basant Geet. Goddess Saraswati is worshipped during Basant festival. Floors decorated with patterns made of rice flour are a usual scene in Garhwali homes during Basant Panchami. People wear bright yellow clothes for the occasion.

These are dance-songs Garhwali women of Uttarakhand sing when they walk to the forest to collect grass for their cattle. They are melodious and rhythmic songs.

They are Bhojpuri songs about common man and his day to day life. These songs include a lot of minute observations about the villagers, especially their perceptions and beliefs.

This is another form of folk song prevalent in Tamil Nadu. They are songs about the chivalry and bravery of Chola rulers. Usually, women sing these songs while playing with an Ammanai (wooden ball).

This genre of music native to Maharashtra is a combination of traditional dance and song. It is usually performed to the beats of the percussion instrument ‘dholki’. The songs sung in a quick tempo with a powerful rhythm have contributed greatly to the development of Marathi folk theatre.

what is regional Indian music?

Regional music in India is as diverse as the nation’s cultural traditions.
Folk music is an inevitable part of Indian culture. Different types of musical instruments are used by people of different geographical and cultural groups.