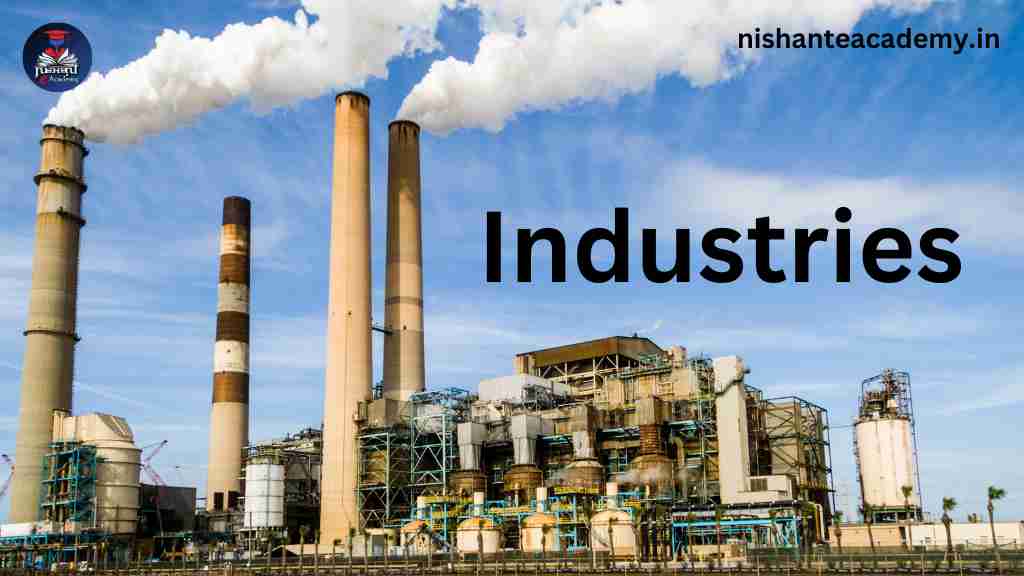 Industries – India has been successful in achieving autonomy in producing different basic and capital products since independence. Since independence to 1980 there was restrictive growth of private sector and government’s permission was required to set up any private enterprise in India. Other factors such as poverty and famine lowered India’s economic growth rate during this period. Post 1980s India saw liberalization and achieved further impetus in Mid-1991.

The Industrial Policy Resolution of 1956 gave the public sector strategic role in the economy. It categorised industries which would be the exclusive responsibility of the State or would progressively come under state control and others. Earmarking the pre-eminent position of the public sector, it envisaged private sector co-existing with the state and thus attempted to give the policy framework flexibility.

In 1973, Joint Sector was constituted on the recomendations of Dutta Committee. The Industrial Policy of 1980 was influenced by the concept of federalism and the policy of giving concession to agriculture based industries was implemented through in it. Various liberlised steps to be taken were declared at comprehensive level, in the Industrial Policy declared on 24th July, 1991.

New Economic Policy is related to economic reforms. Its aim is to bring about reforms in production pattern, to obtain new technology and to use full capacity expeditiously and in Toto.

The main reason to start new economic policy (1991) was Gulf-War and problem of balance of payment in India.

The following four main steps were taken under the Fiscal Policy, 1991:

Since economic reform, poverty has been declining from 36% in 1993 to 26% by the end of 10th plan. But as far as inequality is concerned it has increased. A World Bank Report 1999-2000 confirms this rise in inequality. 100% foreign investment has been approved 100% export originated units. The limit of foreign investment in some industries and Industrial sectors were as under:

Disinvestment means to decrease the share of government in the industries. In 1996, Disinvestment Commission was constituted to review, give suggestions and make regulations on the issue of disinvestment.

Shri G.V. Ramkrishna was the first Chairman of Disinvestment Commission.

In the year 1992, National Renewal Fund was constituted for rehabilitation of displaced labourers of sick industrial units affected due to industrial modernization, technological development etc.

“Navratna” is a company which is rising at world level. To encourage these companies, the government has given them complete autonomy. 11 such companies have been identified.

In the second phase of economic reforms programme, the main aim is to eradicate poverty from the country and development at the rate of 7 to 8%.
Some Important Terminology Relating to the New Economic Reforms Policy:

Privatisation — To increase participation of private sector in the public sector companies by capital investment or by management or both or to hand over a public sector unit to a private company is called Privatisation.

Globalisation — The process of amalgamation of an economy with world-economy is called Globalisation. It is signified by lower duties on import & export. By doing so, that sector will also get private capital and foreign technology.

Disinvestment — To reduce the govt. share in the public sector is called disinvestment.

In case of private sector the main objective is maximization of profits whereas PSE’s mainly aim for fulfillment of public, or social interest.

The main Objectives of Public Sector are:

Navratna was the title given originally to nine Public Sector Enterprises (PSEs), identified by the Government of India in 1997 as its most prestigious, which allowed them greater autonomy to compete in the global market. The number of PSEs having Navratna status has been raised to 16, the most recent addition being Oil India Limited.

In 2009, the government established the Maharatna status, which raises a company’s investment ceiling from Rs. 1,000 crores to Rs. 5,000 crores. The Maharatna firms would now be free to decide on investments up to 15 percent of their net worth in a project. Earlier, the Navaratna companies could invest up to Rs 1,000 crore without government approvals.

In order to qualify as a Maharatna, the process is bottoms up. This means the lowest employee should be proud of his/her company and contribute to the same according to the global standards. The 6 point criteria for eligibility as Maharatna are:

Navratna was the title given originally to nine Public Sector Enterprises (PSEs), identified by the Government of India in 1997 as its most prestigious, which allowed them greater autonomy to compete in the global market. The number of PSEs having Navratna status has been raised to 16, the most recent addition being Neyveli Lignite Ltd .

Category I: This designation applies to PSEs that have made profits continuously for the last three years or earned a net profit of Rs. 30 crores or more in one of the three years. These miniratnas granted certain autonomy like incurring capital expenditure without government approval up to Rs. 500 crore or equal to their net worth, whichever is lower.

Category II: This category include those PSEs which have made profits for the last three years continuously and should have a positive net worth. Category II miniratnas have autonomy to incurring the capital expenditure without government approval up to Rs. 250 crore or up to 50% of their net worth whichever is lower.

Small Scale Industries: Small scale and cottage industries have an important role to play in a labour surplus developing economy like India. Their importance can be explained as:

In 1855, first Jute Factory was established in Rishara (West Bengal).

In 1853, after the establishment of railway in India industrial development got momentum here. Rapid expansion of Indian industries started due to development of the means of communication.

Questions 2
One of the objectives of Industrial Licensing Policy in India was to ensure: [SSC Grad. 2004]
(a) Creation of adequate employment opportunities
(b) Free flow of foreign capital in Indian industries
(c) Use of modern technology
(d) Balanced industrial development across regions

Questions 3
Why did the Supreme Court, in their judgment of September, 2003, hold that privatisation of HPCL and BPCL was not permissible? [SSC Grad. 2004]
(a) Due process of law for disinvestment had not been followed
(b) It is against the interest of the capital asset in the form of their employees
(c) It had not been recommended by the Disinvestment Commission
(d) It is in conflict with the statutes that created HPCL and BPCL

Questions 4
Which of the following is NOT an immediate indicator of industrial sickness? [SSC Grad. 2006]
(a) Drop in profitability
(b) Labour unrest
(c) Shrinking of market credit
(d) Decline in market share

Questions 5
Which of the following is the classification of industries on the basis of raw materials? [SSC Sec. Off. (Aud.) 2006]
(a) Small Scale and Large Scale
(b) Primary and Secondary
(c) Basic and Consumer
(d) Agro-based and Mineral

What are the ‘Core Industries’ in India?

Electricity, Coal and Petroleum Products are the ‘Core Industries’ in India.

Which is the biggest enterprise of the Government of India?

The biggest enterprise of the Government of India is Railway.

Which car company has launched the cheap car ‘Nano’?

Since when disinvestment started in public enterprises?

Since 1991-92 disinvestment started in public enterprises.