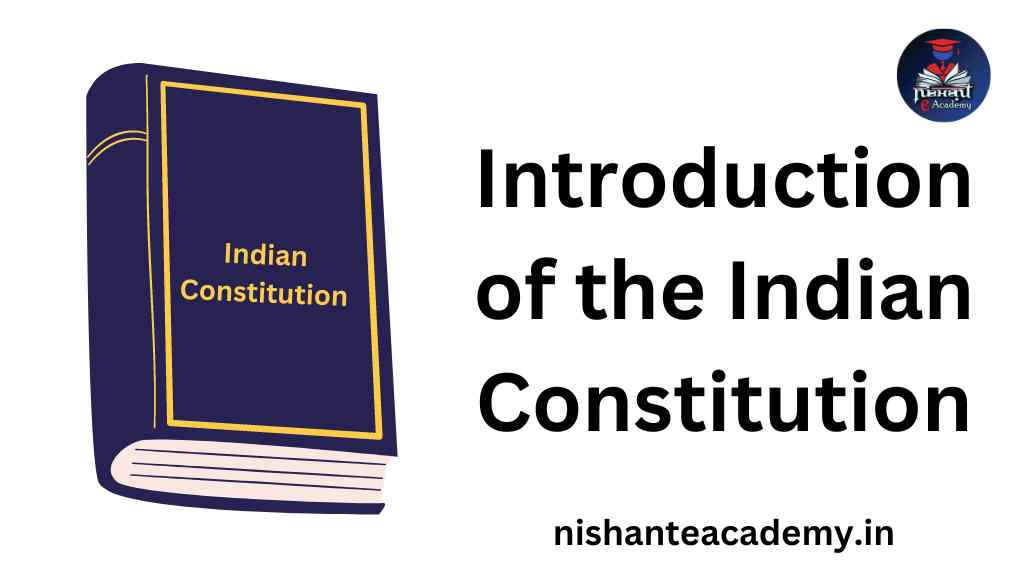 The Indian Constitution, adopted by the Constituent Assembly on 26 November 1949, is framed and given to themselves by the people of India. It came into full operation with effect from 26 January 1950. Originally adopted Constitution had 22 parts, 395 articles and 8 schedules. Since its adoption:

Sources of the Indian Constitution

The source of the Indian Constitution are diverse and many. These are both indigenous and foreign. Nearly, 75 percent of the Constitution can be said to be a reproduction of the Government of India Act, 1935 with suitable adaptations and modifications. Besides the indigenous sources, many prominent features of the Constitution were also borrowed from foreign sources which include Irish, British and US constitutions.

Parts of the Indian Constitution

In this section the articles in the constitution are grouped as follows:

The Preamble, with the words “socialist” and “secular”, and ‘integrity’ was added in 1976 by the 42nd amendment.

Schedules of the Indian Constitution

Schedules are basically categories that facilitate governance and policies.

Important Amendments of the Indian Constitution

There are three types of amendments to the Indian Constitution of which the second and third type of amendments are governed by Article 368.

The first type of amendments includes that can be passed by “simple majority” in each house of the Parliament of India.

The second type of amendments includes that can be effected by the parliament by a prescribed “special majority” in each house; and

The third type of amendments includes those that require, in addition to such “special majority” in each house of the parliament, ratification b at least one-half of the State Legislatures.

1st Amendment (1951): Added Ninth Schedule. This amendment provided several new grounds of restrictions to the right to freedom of speech and expression and the right to practice any profession or to carry on any trade or business as contained in Article 19 of the Constitution.

9th Amendment (1961): Gave effect to the transfer of certain territories to Pakistan in pursuance of the agreement between the Governments of India and Pakistan.

38th Amendment (1975): It sought to make a declaration of Emergency non-judiciable and placed beyond the jurisdiction of courts, the Ordinances and Proclamation of Emergency issued by the President and Governors.

39th Amendment (1975): Placed beyond judicial scrutiny, the election of President, PM and Chairman to either House of Parliament.

44th Amendment (1978): The restoration of life of Lok Sabha and State Assemblies to 5 years.

52nd Amendment (1985): Added 10th Schedule which contains provisions as to disqualification on ground of defection.

73rd Amendment (1992): Panchayati Raj Bill passed. Constitution of panchayats at village and other levels. Direct elections to all seats in Panchayats and reservation of seats for the SCs and STs and fixing of tenure of 5 years for Panchayats.

74th Amendment (1993): Nagarpalika bill passed. A new Part IX-A relating to the Municipalities was incorporated in the Constitution of 3 types of Municipalities, i.e., Nagar panchayats for areas in transition from a rural area to urban area, Municipal Corporations for larger urban areas. Reservation of seats for SC, ST and women.

85th Amendment (2001): Amended Article 16(4A) to provide for consequential seniority in promotion by virtue of rule of reservation for the government servants belonging to the SCs and STs.

86th Amendment (2002): It provides for (i) insertion of a new article 21 A that the State shall provide free and compulsory education to all children of the age of six to fourteen years in such manner as the State may, by law, determine.

88th Amendment (2003): It provides for the insertion of a new Article 268A which states that taxes on services shall be levied by the Government of India and such tax shall be collected and appropriated by the Govt. of India and the States in the manner provided in clause (2).

89th Amendment (2003): It provides for the amendment of Article 338 and insertion of a new article 338A which provides that there shall be a National commission for ST.

93rd Amendment (2005): In this Amendment, a provision has been inserted that the State (i.e., parliament or other legislatures) can make laws for the advancement of the SC, ST or the OBCs of citizens in matters of admission to educational institutions, including private unaided institutions.

95th Amendment (2010): Extended the reservation of SC and ST seats in Lok Sabha and State Assemblies from 60 to 70 years.

99th Amendment (2015): It provides for formation of a National Judicial Appointment Commission.

100th Amendment (2015): It provides for amending First Schedule, that deals with acquisition of certain territories of Bangladesh following agreement between India and Bangladesh.

101st Amendment (2017): The Constitutional 101st Amendment Act, 2016, contains the provisions necessary for the implementation of GST Regime. The amendment Act contains 20 amendments. The important changes made in constitution (new articles / amended articles) via this law are Article 246 (A), Article 269A, and Article 279-A. Changes in the 7th Schedule are in the Union List and State List.

102nd Amendment (2018): It gives constitutional status to National Commission for Backward Classes addition of Articles 338B, 342A and a Clause 26C. It removed Article 340 and modified Article 338 and 366.

104th Amendment 2020: To extend the reservation of seats for SCs and STs in Lok Sabha and Vidhan Sabha (State Assemblies) from 70 years to 80 years. It removed the reserved seat for the Anglo-Indian community in the LS and State Assemblies. The amendment of Article 334 was passed on 25th January.

105th Amendment (2021): It restores the power of State Governments to identify and specify Socially and Economically Backward Classes (SEBCs). It received the assent of the President of India. The Constitution (127th amendment) Bill 2021 was passed by the Parliament on 11th August, 2021.