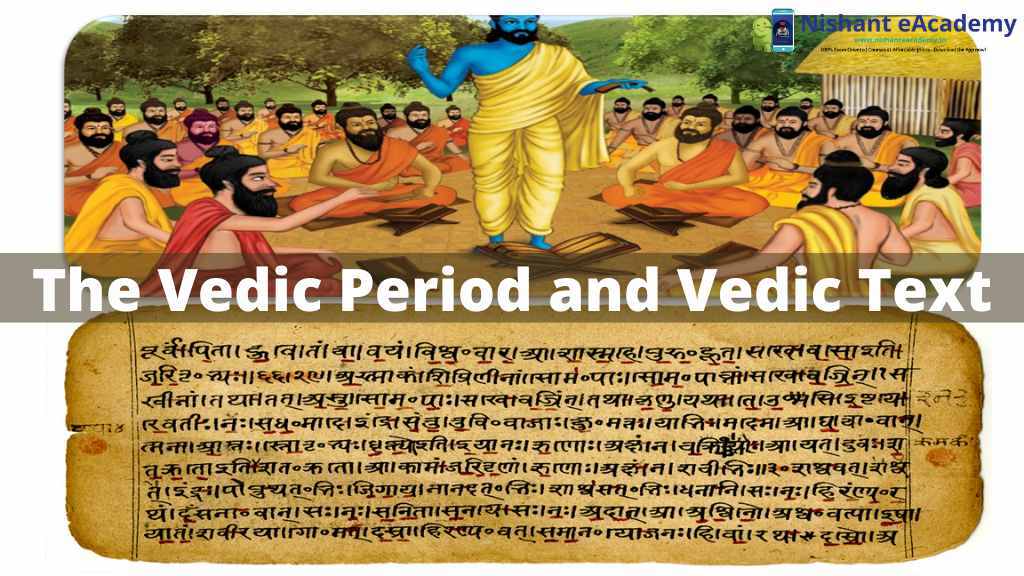 Complete Exam-oriented notes on Vedic Literature (Part 1 of the complete notes of The Vedic Period and Vedic Text), designed and written in such a strategic way to cover all the important points like – who were Aryans? What is Shruti? what is Smriti? Students will also get brief and to-the-point notes on Samhitas (Vedas), Brahmanas, Aranyakas, Upanishads, Rig Veda, Yajur Veda, Sama Veda, Atharva Veda, Vedangas, Smritis Dharmashastras, Mahakavyas, Puranas, Upvedas, Shad Dharshanas etc.

“Part 1 of Compete Notes on The Vedic Period”

In the Last post, we studied the Harappan civilization. The time period of the Harappan Civilization was 2500 BC – 1750 BC but around 1900 BC, this civilization started declining. Now, the largest urban civilization of the world is divided into many Rural civilizations. During this period, the entry of the Aryans or Indo Aryans is known. Aryans were the nomadic people that come to India from the Central Asiatic region. The native place of Aryans is still a controversy. Many Scholars believe that they migrated to India from Central Asia while some others believe that they came from Europe and according to a few others, Aryans migrated from the Arctic region.

The migration of Aryans from Central Asia is called Max Muller theory whereas the migration of Aryans from the Arctic Region is as per the Bal Gangadhar Tilak. but most of the pieces of evidence like spoked wheels, fire cult, evidence of horses, cremation, Boghazkai inscription etc. were found from the Central Asiatic Region that supports the Max Muller theory.

When Aryans settled in North-Western India, the culture occupied by them is called Vedic Culture and the Text written by them is called the Vedic Text. while reading all Vedic Texts, we can easily realise the socio-cultural evolution of Aryans. This evolution has two stages. One – Literature development and the Second – Social and Cultural development.

The Vedic Literature: What does Veda mean?

The root word of Veda is Vid which means to know. so, the Veda actually means sacred knowledge. There are two types of texts in all Vedic literature.

There are four types of Vedic Literature, collectively called Shruti. Shruti means “that which is heard”. We have mentioned this in the Historical Sources Topic. Watch Video for a better understanding.

The four types of Vedic Literature are

Vedas are the most important Vedic Literature and it is also called Apaurasheya. Apaurashya means “Not created by Man and God gifted”. It is also called Nitya which means “existing in all eternity”.

There are four types of Vedas –

what is the other name of the later Vedic age?

Who were the Aryans?

Aryans were the nomadic people who had migrated from the central Asiatic region to north-western India. They were the compositor of Vedas.

What does Veda mean?

The root word of Veda is Vid which means to know. so, the Veda actually means sacred knowledge. There are two types of texts in all Vedic literature.

What are the Post-Vedic and Pre-Vedic Periods?

who is the supreme god of the early Vedic age?

who was the composer of rig Veda?

What is the content of the 10th Mandala of Rig Veda?

the 10th Mandala of Rig Veda contains the famous Purushasukta which explains the Verna System.

Gayatri Mantra (Savitri) is a part of which Veda?

it is a part of Rig Veda.

In which part of Yajur Veda Aswamedham can be found?